The History of the University of Arizona Arthritis Center 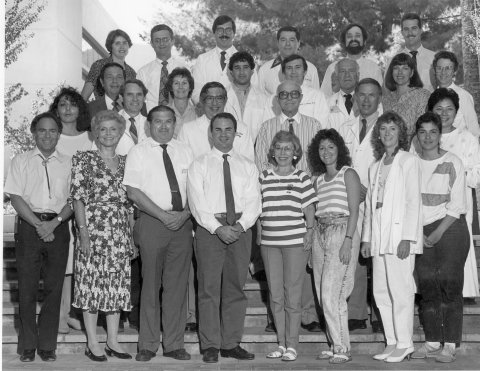 2015 The Southwestern Clinic and Research Institute Endowed Lectureship is established in recognition of over 80 years of research collaboration between the Southwestern Clinic and Research Institute and the University of Arizona Arthritis Center. The Eric P. Gall, MD Endowed Lectureship is established, honoring UAAC co-founder and former director Dr. Gall for his leadership and service to the University of Arizona and the field of rheumatology.

2013 C. Kent Kwoh, MD, is named Director of the UAAC, the Charles A. L. and Suzanne M. Stephens Chair of Rheumatology, chief of the division of rheumatology and professor of medicine and medical imaging in the University of Arizona College of Medicine.

2010 Eric P. Gall, MD, MACP, MACR, co-founder of the UAAC, returns to the UA to become interim director of the Center and to resume teaching in the rheumatology fellowship as Professor of Medicine in the UA College of Medicine.  Dr. Gall replaces Salvatore Albani, MD, PhD.

2009 John A. Szivek, PhD, director of the UA Orthopaedic Research Laboratory and an UAAC senior scientist, is recognized in April with “Outstanding UBRP Faculty Mentor Award” for his exemplary work with graduate and undergraduate students. Dr. Szivek and his students have focused on re-growing the cartilage that covers the bone surfaces of joints. The UAAC supports an innovative international program in May for researchers in translational medicine. Dr. Szivek awarded a National Science Foundation Grant in June for work in biomechanical load analysis. (Dr. Szivek’s research in growing replacement cartilage for joints includes accommodating sensors and a transmitter that notify a patient when the joint is overloaded.)

2008 Salvatore Albani, MD, PhD, becomes director of the UAAC in January and holds the Charles A. L. and Suzanne M. Stephens Chair for Rheumatology Research. The UAAC and Dr. Albani host a pivotal consensus conference in November to outline an ambitious research program in juvenile arthritis.

1996 Enid and Mel Zuckerman Chair for Studies in Psychoneuroendoimmunology – the branch of science that examines how psychological factors such as stress affect the nervous, endocrine (hormone) and immune systems – established in January to support research, patient care and disease prevention based on the Canyon Ranch model of mind-body therapies. William and Sylvia Rubin Chair for Orthopaedic Research established in January. Disability Assessment Research Clinic (DARC) established in April under the direction of David Wayne Smith, DEd, DABPS, DACFE. Bank One of Arizona provides a generous gift in July to fund building of the UAAC’s auditorium (UA College of Medicine Room 8403, re-named Chase Bank Auditorium upon Bank One’s merger).

1995 “Roof Breaking” on October 14 begins renovations of the top two floors of University Medical Center to house the UAAC.

1994 Dr. Yocum becomes director of the UAAC. (Dr. Gall leaves to become chair of the Department of Medicine at the Chicago Medical School.)

1993 UAAC begins affiliation with Canyon Ranch, through Mel and Enid Zuckerman, in October to offer integrative arthritis education and therapies. The UAAC is a seminal site for the NIH Women’s Health initiative. Studying risk factors and treatments of osteoporosis eventually lead to changes in the use of estrogen replacement.

1989 Internationally-renown rheumatologist David Yocum, MD, describes the characteristics of tumor necrosis factor in rheumatoid arthritis and develops tests that predict patients’ responses to certain drugs, such as cyclosporine, with potential toxicity, thus allowing physicians to determine who would benefit from treatment.

1987 UAAC begins alliance with Southern Arizona Home Builders Association (SAHBA) in April, through the efforts of SAHBA member and founding UAAC advisory board member Saul Tobin to establish the Lute Olson Celebrity Auction and Golf Tournament to benefit UAAC research. The Center develops a multidisciplinary research, education and practice model. This successful model, conceived by Drs. Boyer and Gall, is recognized and emulated by many other programs. A scientific advisory board, consisting of health-care providers, researchers and educators, is developed to set the tone for these activities and to develop interdisciplinary programs.

1986 Fred Armstrong becomes the first chairman of the UAAC advisory board. (In 1991, he and his wife, Christine make the lead gift of $1 million to begin funding construction of the UAAC research facility.)

1978 UA College of Medicine among the first 11 institutions in the country to receive an NIH/MAC grant under the National Arthritis Act, laying the foundation for the Arizona Board of Regents Arthritis Center concept. Dr. Boyer serves as a director of the Arizona MAC. Funding continues for nine years (three cycles). Accomplishments include multidisciplinary research models; self-help course in English and Spanish for rheumatoid arthritis (RA), lupus, and fibromyalgia patients; and development of novel education programs for health-care providers using “standardized patients” (patient instructors), lay people trained in physical exam and medical interview techniques who portray actual patient cases and provide feedback about providers’ communications skills. The Arizona MAC becomes a national resource for multicultural, multidisciplinary activities.

1976 RMP staff and community rheumatologists begin planning for an Arthritis Center at the UA College of Medicine. Testimony is given to the National Arthritis Commission in Tucson in the first of several national hearings. In 1977, the National Arthritis Act is signed by President Gerald Ford. The UA applies for a National Institutes of Health (NIH) Multipurpose Arthritis Center (MAC) grant, under the direction of Dr. Boyer, now chief of the Section of Rheumatology, and Gail Kershner Riggs, MA, CHES, director of education for the RMP.

1973 Orthopaedic surgeon Robert G. Volz, MD, establishes a laboratory for the study of novel total joint replacements at the UA. (Dr. Volz designs the first artificial wrist in 1974, recognized by the American Hospital Association in 1976 as one of the nation’s ten most important hospital advances). First board-certified rheumatologist and allergist recruited to the section of Clinical Immunology. Rheumatologist Eric P. Gall, MD, establishes the rheumatology section at the Tucson Veteran’s Administration Hospital. Dr. Jacob Pinnas recruited as an allergist with an interest in lupus.

1968 Section of Clinical Immunology established at the UA College of Medicine, with John (Jack) Boyer, MD, serving as chair. Service to Native Americans begins with visits to health-care centers that provide rheumatology care and expands to include programs at tribal hospitals throughout Arizona and New Mexico as well as studies of this population.

1950 Southwestern Clinic and Research Institute (SCARI), originally part of the Holbrook-Hill Medical group clinic, moves to the basement of the College of Agriculture building on the University of Arizona campus to do the first arthritis research at the UA. Community rheumatologists are active in the establishment of the UA College of Medicine and later with the development of the University of Arizona Arthritis Center.